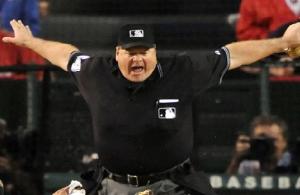 Starting this year, Major League Baseball will offer a challenge system. Each coach will have two challenges per game, just like in the NFL, to challenge calls. This system is supposed to make the MLB a more fair game.
Why the New System Will Help Baseball
by BenD, benspn.com owner
The new replay system will make the MLB a better, and better officiated, game. The only concern with the replays is the time delay, which should be no concern—of the five replays used on Opening Day, none took more than two and a half minutes. Of those five calls, two were overturned. (The Cubs lost the first-ever instant-replay challenge, ). In the 2013 World Series there were many calls, including obstruction, which could have been reversed had instant replay been used.
Why This New System Does Not Make Sense
by guest blogger
For years, baseball was the only professional sport in America refereed solely by human eyes. While it had its fair share of disputes, this was just considered “part of the game.” However, when the new millennium rolled around, many new enthusiasts advocated for instant replays, if only for home runs. After that system was implemented, it has been straight downhill for there. Umpires have been replaced more and more by machines. Besides the new home-run review rule, umpires are also subjected to the judgment of the “PitchTracker” and can lose their jobs if they don’t call games accurately enough.
This is ridiculous, just as the new instant replay system is. Baseball will always have that “human aspect” that can never be taken away. It is up to umpires to make the calls, not machines. While it may sound ridiculous, I am a firm believer that preserving that part of the game is more important than getting that extra 2 percent of calls right. Therefore, no matter how many challenges they are given, or how “perfect” the system appears to be, Major League Baseball is making a huge mistake by taking any calls out of human hands.